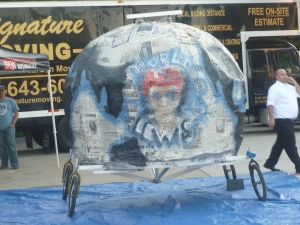 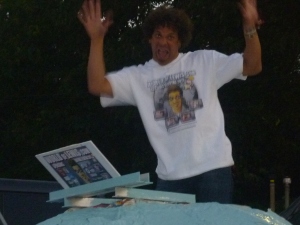 I am really excited to have been invited to ride out and see the Red Bull Flugtag event this weekend!  Don’t worry – I had never heard of it before, either.  But my favorite DJ, Lewis Alston, from 99X has a TV show on Comcast On Demand here in Atlanta, called World Of Lewis.  It’s a great show, and I was even in one episode.  But, that’s another story.  So, anyway, his team was selected to participate.  So, they had to build this aircraft that they are going to jump off of a pier with into the Tampa Bay.  The craft that actually  “flies” the farthest wins!   They had a public event last night, where I got to help paint it a little.  My friend, Dee, who I actually met on Facebook by being a World Of Lewis fan, invited me to ride with her.  So, I’m going!!  .