OK, so my brother-in-law is a butcher. No, really, a real old-fashioned butcher! And he raises deer, g 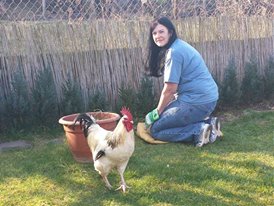 oats and chickens and slaughters them himself. He is also a great cook, and does catering for special events. However, I refuse to eat any of the animals that he slaughters. And yet, I am not a vegetarian. I just have a problem with eating the animals that I’ve fed or petted or interacted with.

But I’ve been trying to get myself over that mindset. After all, this is meat from animals that lived well. I know that for a fact. I know where they come from. I know that these animals are healthy. The meat that you buy in the store – these poor animals were tortured. They live in terrible conditions. They are mistreated. They are injected with things that I have no idea what they are, yet I would rather eat them and put that stuff in my body for some unknown reason. I sort of justify it by thinking that these poor animals are better off dead than living the way that they do.

Alright, I could become a vegetarian and put an end to eating any kind of meat. But, I would be lying to myself. Because I love bacon!! And hamburgers! Well, I could certainly cut down on my meat intake, and I don’t have to eat meat every day, but I wouldn’t want to lie and say I’m going vegetarian, because I already know I would ‘slip’.

And, for those who would tell me that this would be a good reason to become a vegetarian – I have another argument for that. Actually, the vegetables that you buy in the store are not always the best, either. You don’t know what they’ve been sprayed with or what’s been pumped in them to make them look good and grow fast. You could still be putting toxic things in your body. Just because it says ‘organic’ on the label, doesn’t mean it necessarily is. Growing your own vegetables in your own backyard would be the only way to go. And, who has time for that?

The food that you don’t see before you eat it, whether it be meat or vegetables, is not necessarily good for you. So, what’s a person to do?